Despite an astonishing improvement over last year’s blowout, the team of Larry McDonnell and Ryan Mouw were unable to come back from an early deficit, losing the McMouw Cup for the second straight year to Mick McDonnell and Ron Mouw. The Big Brothers needed a strong finish to retain the Cup with a three stroke victory over Larry and Ryan.

Both teams showed tremendous progress over last year and both posted their lowest scores in the four-year history of The McMouw Cup. The Younger Brothers last won the Cup in 2012 with a 16-over par score of 88. This year they lost by three with a score of 84.

“I’ve got to give Larry and Ryan a lot of credit” said Mick McDonnell. “They started slowly, but really played their hearts out on the back nine today. It was a lot easier to put these guys away a couple years ago, but they’ve worked hard on their games and are much stronger mentally.”

“It’s always disappointing when you lose the McMouw Cup” said Ryan Mouw. “But I’m really proud of our effort today. I’ve been working on my swing and my approach to the game with my coach, Mike Mandakas over at The Chicago Players Club. Mike and his team have made a huge impact on my game and it showed today. I’m really looking forward to the Flagg Creek Showdown this year.”

It’s been called the ultimate war of attrition on a golf course. The battle for the 2012 McMouw Cup certainly lived up to that moniker as younger brothers Larry McDonnell and Ryan Mouw outlasted older brothers Mick McDonnell and Ron Mouw by one stroke on the final hole to gain control of the coveted McMouw Cup.

After enduring an entire year of disappointment from losing the inaugural competition between brothers, Larry and Ryan dedicated themselves to improving their games with the hope of victory in 2012. Their efforts were rewarded after sinking the final putt on the 18th hole to preserve the victory.

Both McDonnell brothers were less than 100 percent on Shootout Saturday. Larry McDonnell was afflicted with a digestive virus that left him dehydrated for much of the round and desperately in need of fluids on the final hole. Brother Mick played despite a painful wrist injury that many feared might not allow him compete at all.

“Larry displayed the heart of a champion today” said partner Ryan Mouw. “He was nauseous and weak all day long, but somehow he still managed to hit some great shots and lead us to victory. I’m also really pleased with how we performed under such intense pressure. We didn’t want to lose the Cup the first two years, because it would become even more difficult next year. I’m looking forward to bringing this Cup everywhere I go for the next year.”

The requested URL /data/feed/api/user/golfaid%40gmail.com/album/2012McMouwCup?kind=photo&authkey=Gv1sRgCMW6vJ71_LvnsQE was not found on this server. That’s all we know.

Competition for the McMouw Cup at the 2012 Invitational Shootout should be at an all-time high. Both teams have spent the past 364 days working on their golf games with the hope of capturing possession of this highly coveted trophy. Here are some behind-the-scenes moments on the driving range as the McMouw Cup competitors prepare for battle.

The highly coveted McMouw Cup, which is annually presented to the triumphant McDonnell and Mouw brother combination at The Invitational Shootout, has reportedly vanished. The Cup was awarded to Mick McDonnell and Ron Mouw at the 2011 Shootout and subsequently made numerous public appearances throughout the past year. Then in early April, according to the team of Ryan and Larry, the Cup disappeared from the elder McMouw brothers.

“Ron and Mick proudly displayed the Cup at every public and family gathering they attended” said Mike Howley. “That Cup was definitely becoming a part of their families, I’m shocked that it’s missing.”

“I put together a short list of trophy shops for you, so you can order a new McMouw Cup” teased Ryan Mouw. “I’m sure any any of these will work. Larry and I prefer a new trophy for 2012 anyways.”

Replied 2011 McMouw Cup winner Mick McDonnell, “Ha, I can guarantee few things in life, but I can guarantee that I have lost nothing, period, and that a McMouw cup WILL be present at this year’s tournament…perhaps with revised custody rules.”

Tournament officials have begun their initial investigation and will be interviewing all parties within the next week in advance of the 2012 Invitational Shootout on Saturday, June 2. 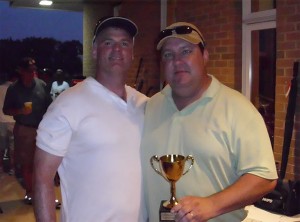 For the third consecutive year, brothers will compete against brothers in The Invitational Shootout as Mick McDonnell and Ron Mouw will square off against Larry McDonnell and Ryan Mouw. Both teams have proven they will do anything for a victory and this year should be no exception.

“Competing against my brother and Ryan Mouw makes The Shootout a very special experience for my partner Ron and myself” said Mick McDonnell. “I’ve got nothing but respect for those guys because they play the game the right way, with absolute integrity and class.”