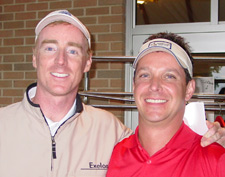 After three previous second place finishes, the team of Aaron Wits and Joel Welder finally achieved their ultimate goal by winning the 2005 Invitational Shootout at Maple Meadows presented by The Pit Rib House. Wits and Welder overcame a brief, but severe weather delay and the largest field in the history of the tournament for a one stroke victory over Dan O’Connor and Paul Newman.

“Winning The Shootout has always been a dream for us” said Joel Welder. “I can’t believe that we’ve finally accomplished what we set out to do five years ago. It’s almost like this is all a dream”

“We’re proud to have Aaron and Joel as our 2005 champions and we’re confident that they will represent our tournament well over the course of the coming year.” said tournament organizer Michael Howley. “We raised a great deal of money for The Helping Hand and we had a great tournament with two deserving champions.”