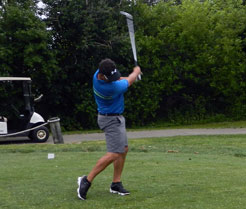 Since 1994, the Invitational Shootout Charity Golf Tournament has brought together friends and family on the golf course to have fun and raise funds for charity. In 2016, we support one of our own.

On March 5, 2016 our friend Mike Ruddy passed away suddenly leaving his wife and three children. Mike was a happy, fun-loving guy who made friends easily and kept them for a lifetime. He was a man of integrity who loved his family and played in The Shootout multiple times.

This year The Invitational Shootout will benefit The Ruddy Children Fund as we play the game that Mike loved in his honor.

The 2016 Invitational Shootout in support of The Ruddy Children Fund

Whether you play golf or not, EVERYONE can help support the cause by making a pledge donation. For golfers, the more pledges made in your name add up to great prizes for you. The person who raises the most funds will receive a 3-Night Las Vegas Vacation. All net proceeds will go to The Ruddy Children Fund.